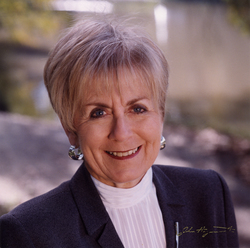 More than fifty years from the time she completed her nursing degree at UW–Madison, Gruendemann received her PhD in nursing science from Texas Woman’s University College of Nursing. In concert with her doctorate, she was given the Virginia Chandler Dykes Leadership Award for her lifelong commitment to improving quality of life in the community and furthering the importance of education.

Add up Gruendemann’s achievements as nurse leader and lifelong learner after graduating from UW–Madison in 1959 and it becomes quite clear that she shaped practice in surgical patient care and reached beyond the bedside with innovations in nursing education.

Gruendemann’s career began as a staff nurse in obstetrics in a rural Wisconsin hospital where she learned to scrub and circulate on c-sections and care for both mothers and their babies. The experience drew her to perioperative, or operating room (OR), nursing care. In this area, she moved the standard of practice on infection prevention forward.

Gruendemann’s work was a precursor to today’s quality assurance protocols, ensuring quality of service or product. She established what she called “quality and clinical” standards in a fourteen-room surgery department in California that served as a model for ORs in the greater Los Angeles area. As associate director of Mountain States Surgery Center, she was instrumental in opening a four-operating-room ambulatory surgery center in Idaho, where she formulated policy and established a unique cross-training program for professional staff.

Gruendemann published a total of ten books and forty-one journal articles on nursing education and perioperative care. She completed her tenth book, Infection Prevention in Surgical Settings, co-authored by Sandra Mangum, in 2001. It is the first of its kind to discuss infection control guidelines that directly relate to surgical environments.

Her level of expertise in this area brought her to Johnson & Johnson Medical, Inc. For eight years, she worked as director of worldwide professional education at Johnson & Johnson Medical, Inc., establishing one of the first educational departments within a major medical products company. She traveled worldwide—twenty-two countries and the United States—educating nurses and physicians on best practices in surgical patient care. Topics included OR infection prevention and control, aseptic principles and practices, and wound care.

She was one of the first perioperative nurses in the United States to be elected as a Fellow to the American Academy of Nursing—a fellowship that boasts the “best and the brightest” in the nursing discipline. She served as president of the Association of Perioperative Registered Nurses (AORN) and was the first recipient of AORN’s Award for Excellence in Perioperative Nursing, its most prestigious award. She also received the Distinguished Achievement Award from the Nurses’ Alumni Organization in 1986 for her outstanding contributions to nursing.