The impact of stigma on LGBTQ+ health 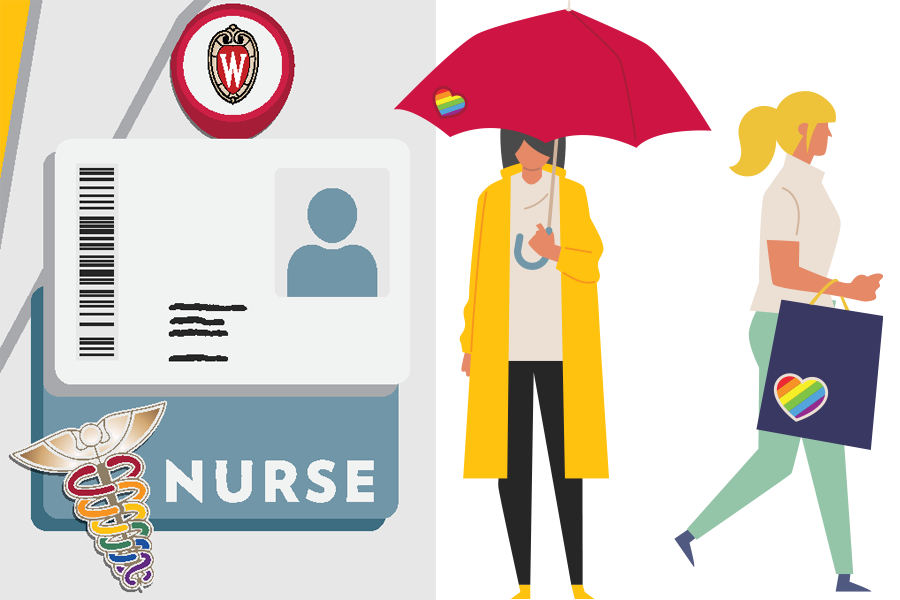 Throughout our country’s history, cases of homophobia, transphobia, and legal discrimination have plagued the LGBTQ+ community, especially when it comes to health care. From political discussions and policy changes regarding LGBTQ+ patients’ health care rights, to events like the mishandling of the HIV/AIDS epidemic or the 1995 death of Tyra Hunter, a Black trans woman who was denied medical care after a car accident when the EMTs discovered that she was trans, much of the LGBTQ+ community has developed a general mistrust of medical institutions. Negative interactions with providers who have personal biases against the LGBTQ+ community, or who do not understand their patients’ needs, deepens this mistrust, which leads to poorer health outcomes for patients, or patients avoiding seeking care altogether.

“I think when nurses’ attitudes change, it affects so many different lives and that’s meaningful.” — Anna Landry ’19

To improve health outcomes for LGBTQ+ patients, nurses must challenge their own biases and advocate for their patients, as individuals and as a community. “Nursing theory and nursing practice are so much more patient-centered and holistic than traditional medical theory and practice,” says Anna Landry ’19, who identifies as queer and currently works as an inpatient nurse on the general surgery unit at UW Health University Hospital. “We are the most trusted professionals for a reason. So, I think that for nursing professionals and researchers to dedicate resources to improving health equity for LGBTQ people is very impactful in itself. Because we know that nurses touch so many lives in so many different ways, and nurses work in so many different areas. I think when nurses’ attitudes change, it affects so many different lives and that’s meaningful.”

For many LGBTQ+ patients, it is a struggle to find providers who understand their unique health needs, respect their wishes, and provide a safe environment. “Providers see things from a very heterosexual lens, and so questions get missed that could affect the topics that are brought up during the discussion or what advice they give you for your health,” says Beth Alleman Borkowski ’19, who identifies as bisexual and currently works as an infection preventionist at UnityPoint Health – Meriter. “Removing some of those biases and having more open-ended questions and [keeping an] open mind on asking [those] questions can improve care.”

Transgender patients face additional challenges. They are frequently misgendered or referred to as their dead name (the name they had prior to changing it as part of their gender transition) despite correcting the provider. In addition, trans patients may experience the phenomenon known as “trans broken arm syndrome,” in which the patient will go in for one problem (like a broken arm) but their diagnosis is misattributed to hormone therapy or another aspect of their transition.

Additionally, LGBTQ+ patients might not receive care in line with their wishes in situations when they cannot make decisions for themselves. “Oftentimes, if [advanced directives or living wills] aren’t set up properly, non-married partners might not be recognized as the primary decision maker. And sometimes, estranged family members may be contacted prior to queer folks’ chosen family members. If we contact your next of kin, and your next of kin isn’t someone who values your identity, then that’s going to significantly impact your care,” says Alex Dudek, a queer nurse working in the Trauma Life Support Center at UW Health University Hospital while completing their master of public health at UW–Madison.

Unfortunately, even if patients find LGBTQ+-friendly health care providers, they may not be able to afford their care because nondiscrimination policies for health insurers are not universal throughout the country.

When treating LGBTQ+ patients, nurses and other health care professionals need to understand how a variety of factors, including these barriers to safe and accessible health care, intersect to create a full picture of a patient’s health.

Landry says, “I think more emphasis needs to be placed on the systems of oppression that create health inequities. Oftentimes when we mention statistics like, ‘LGBTQ+ people are twice as likely to struggle with mental health issues, and trans people are four times as likely to struggle with mental health issues’ (from the National Alliance on Mental Illness), the blame is unintentionally put on the identity for whatever health disparity exists. There is nothing inherent about being gay that makes me more likely to have depression or any other health issue; it’s the structure of a very hetero- and cis-normative society that I exist in that causes these problems, and also creates barriers to adequate health care. I think that in order to treat LGBTQ+ patients in an equitable manner, nurses and health care providers have to understand that.”

Becoming a Voice for Change

Landry, Borkowski, and Dudek served on the planning committee of the inaugural Wisconsin LGBTQ+ Health Summit in 2019 alongside School of Nursing Diversity Officer Mel Freitag, the event’s founder. The event explored how to build an inclusive and just culture of health, and gave its leaders a new platform for advocacy.

“There’s a tendency to gear course material to an audience of student nurses that are presumably straight white women. And there’s reasons for that, because that demographic does make up a large portion of the nursing workforce. But I think it does almost everyone a disservice when it’s done that way,” says Landry. They continue, “[One reason] that the LGBTQ+ Health Summit felt so remarkable was that I think as a queer person, I am so used to hoping that my existence will be tolerated by the rest of the world, while sometimes still expecting the worst. The bar is so low sometimes. But the Health Summit was more than just tolerating LGBTQ+ people, it was celebrating and prioritizing us and our needs. Events like that really make a better future possible.”

Borkowski adds, “The biggest thing I always found very helpful was hearing from people with lived experience. And I think through the planning committee, it was very deliberate about having speakers and presenters with that lived experience, who are willing to answer questions and talk about it. You have an opportunity to learn about it beforehand, which is another reason it’s so important to have things like this.”

For nurses who are just starting out in advocacy, Dudek shares some advice: educate yourself and increase self-awareness about your personal biases, how your identities intersect with those of others, and how your identities and privileges may impact your work. “Even for folks who are just getting started and might feel like they’re working in a little bit of a silo, just starting to increase our own knowledge can be really beneficial. And starting those really difficult and sometimes uncomfortable conversations with others about changing the way we talk about patients.”