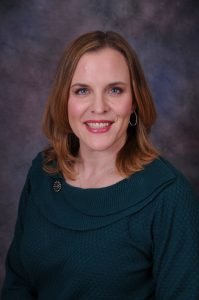 When Brooke Anderson ’00 joined the military, she dreamed of an exciting career and a chance to travel around Europe. Instead, she was met with a national crisis and deployed to a warzone in the Middle East.

Just two weeks into Anderson’s basic training, the September 11 terrorist attacks happened. Everything changed in that moment. Her base was placed under lockdown. No one knew who or what was being targeted. As they waited to find out what would happen next, the usually lively base was silent.

“Everybody was processing what had just happened,” Anderson recalled. “A lot of people that I was there with joined [the military] because it paid for school. It was a bit shock for a lot of people. I had already been to nursing school and paid for my undergraduate degree, so for me it was a different feeling. I kind of expected that we’d go to war since it had been about ten years; I just didn’t think it would happen in my second week.”

Anderson’s experience in the Reserve Officers’ Training Corps (ROTC) had planted the seed to serve but joining the Air Force was a spur-of-the-moment decision. “I was working a night shift at the VA hospital when I decided to contact a recruiter,” Anderson said. Less than a week later, she had signed the paperwork. “My family and friends thought I was crazy, but I had been thinking about it on and off over the years. Working with veterans at the VA solidified my desire to serve.”

Her family was supportive but skeptical. Anderson laughed as she remembered their reaction: “Are you sure you have the right personality to serve in the military? You don’t like being told what to do.” Not all her family was happy about her decision, though. Even before 9/11, Anderson’s mother believed that she would get deployed and die. “I knew dying was a significant possibility, but it wasn’t that scary to me,” Anderson said. “I’m a classic ICU nurse: an adrenaline junky.”

Anderson was resolved to join, despite her family’s doubt. “I wanted to do something bigger with my life,” she said. “All my friends were getting married to their high school sweethearts and buying houses next to their parents, but I wanted more than that.” She considered travel nursing but wanted a more structured environment where she would receive in-depth training. Little did she know what was in store.

Normally, intensive care unit (ICU) nurses would receive six months of training. Because of 9/11, Anderson only received one month of training with all stable patients. As soon as her orientation was over and she was deployed overseas, chaos broke loose.

“One of my first patients had a ruptured AAA (abdominal aortic aneurysm) and they were completely unstable,” she said. “They couldn’t even close the abdomen because the patient was up twenty liters on fluid; we tried to turn them to get the bloody sheets out and their pressures began tanking.” The patient was on a Swan-Ganz catheter, which Anderson had never heard of. “There were a lot of things the doctor was telling me that I didn’t understand.”

Anderson rushed to ask the other nurses for help, but they refused. She discovered that many people on her base had been on the brink of discharge before the war started. Now they had to stay, and their morale was dismal. “Suddenly, we’re all working twelve-hour shifts each day and the boss is in Afghanistan, so it was just a bad time to come into it all,” Anderson reflected. But she didn’t give up. “I went back to the doctor and said, ‘Look, I’m new. I need you to tell me exactly what you need me to do, and I’ll do it. But otherwise, I have no idea what you’re talking about, and no one is willing to help me.’”

The first year was rough for Anderson. “I was constantly like, ‘Oh my god, I’m going to kill somebody.’ Every day I would go home in tears. I didn’t have any friends; I was on my own.” But she was determined to stick it out. “My two options were to succeed or fail. And I don’t fail.” She threw herself into learning, signing up for every available class, staying up late reading textbooks, and watching online videos.

What began as a disaster ended up benefitting her in the long run. Anderson made strong connections with a group of physicians willing to train her, and she received a better education because of their guidance. “Over time, there were also some phenomenal nurses who helped me as well,” she said.

Drawing on Her Degree

When she was deployed to Iraq and later Jordan, Anderson’s bachelor of science in nursing (BSN) from the School of Nursing ended up helping her more than she could have imagined. Facing chaos, again and again, Anderson found herself returning to what she had learned during her undergraduate degree. “I was thrown into many situations unprepared, like my first gunshot wound or burn, and I had to rely on whatever I had learned back in school,” she remembers.

“The first time I saw a blast injury, a gunshot wound, or severe burns, I went back to nursing basics,” Anderson said. “One great thing about a bachelor’s program is that they teach you critical thinking skills. Over time, I realized they could throw anything at me, and I would at least be able to keep the patient alive until they could get them back to Germany for further treatment.”

The challenges kept coming, but Anderson rose to meet them. One day, a patient had a massive heart attack on her shift. Anderson was handed a manual and told she had twenty minutes to figure out how to use a balloon pump (which helps your heart pump more blood), something she had never done before. “In a civilian hospital, you can decline an assignment if you haven’t been trained on something. In the military, they don’t care – you’re going to do it anyway,” she said.

Today, Anderson thanks those early challenges for her unflappability. “Sometimes people think I’m too assertive or too confident, and I’m like, ‘Man, if you’d been through what I’ve been through and managed not to kill anybody, you’d be confident too!’”

A Rocky Transition to Civilian Life

One thing that Anderson found refreshing about military life was that nurses were treated with more respect than in the civilian world. Since rank is based on the years of experience you have in a profession, a higher rank comes with more respect. As a captain, Anderson found that her expertise was valued. “Doctors are trained to listen to nurses, and there is a lot more respect for nursing knowledge,” she said.

When she left the military and began working in civilian hospitals again, Anderson was shocked at how many times a nurse would follow a doctor’s orders even though they knew the order was wrong. “I see pharmacists, nurses, and physicians as providing important checks and balances for each other,” Anderson said. “The military teaches you the ability to stand up, speak up, and advocate for your patients in a respectful way, and that is missing from a lot of civilian hospitals.”

After four years of military service, Anderson found other aspects of civilian life jarring. “I remember just feeling like I had changed so much, but the rest of the world had continued on the same path,” she remembered. “My friends still saw me as the person they’d known in college, but I was completely different. They couldn’t understand what I’d been through.”

Anderson struggled to cope. “I went out all the time and kept as busy as I could. I was very big on coping with trauma by pretending it didn’t exist.” It wasn’t until nine years after her deployment that she realized her PTSD was out of control and she needed professional help.

Today, Anderson’s life has settled. After earning her doctorate in nursing practice at Edgewood College, she became an adjunct professor there for nearly three years. She now serves as the director of human resources and research administration for the UW Center for Tobacco Research and Intervention. While her current job isn’t as harrowing as her military career, Anderson values the opportunities it presents. “It’s a challenge to prioritize my time and to continually learn,” she said. “I get to help people quit smoking not only across the state but around the world.”