The World Health Organization (WHO) identifies climate change as “The Greatest Threat to Global Health in the 21st Century.” While it is widely accepted that the effects of climate change are detrimental to the health of our global climate, it is the corresponding effects on the health of the global community that are ultimately driving the conversation of environmental justice forward in the nursing community. As the most trusted profession in the United States, nurses are uniquely positioned to improve population health by using their training, knowledge, and theories to educate people on the important connection between person and place.

In April 2019, Los Angeles was named the smoggiest city in the United States by the American Lung Association, a title that it has won 19 of the last 20 years. Almost a year later, on March 16, 2020 — three days before the state of California called for Safer at Home orders due to the spread of COVID-19 — the city was still shrouded in a haze of smog hanging low over the region.

However, as communities began to shelter in their homes, the region quickly found air quality numbers bouncing back. Twenty-two days later, Los Angeles saw a 20 percent improvement in overall air quality across southern California. According to IQAir, a Swiss air quality technology company that monitors pollution levels in cities worldwide, Los Angeles found itself experiencing the longest stretch of “good” air quality in the area since 1995.

With scientists all over the globe scrambling to better understand the data quickly pouring in about COVID-19, it did not take long to find a correlation between increased exposure to higher levels of airborne particulate matter in the environment and an increase in mortality rates from COVID-19. The connection between the environment and its effects on public health grabbed the attention of not just the public health sector, but the population-at-large, opening up new questions about just how much climate change is affecting the health of not just our planet, but our people.

You can’t have healthy people on a sick planet

Air pollution has long been proven to travel deep into the respiratory system, resulting in numerous conditions such as irritation of the eyes, nose, throat, and lungs, as well as causing coughing, sneezing, and shortness of breath. Long term exposure has also been linked to chronic bronchitis, reduced lung function, and increased mortality from lung cancer and heart disease.

“We know that air pollution affects every organ system in our body, it’s not just our lungs,” says Jessica LeClair ’05, clinical instructor and PhD student at the School of Nursing. “It also affects our heart and our cardiovascular system. It affects our brain health. It affects our pancreas. It puts us at risk for diabetes. All of the different health issues that are being raised as putting people at risk for COVID-19 can also be the result of pollution.”

The effects of a toxic environment on a community are not just limited to pollutants in the air, either. A WHO assessment of potential health impacts of climate change on human populations, provided the human race stays on its current course with little to no positive change, estimates that climate change will cause an additional 250,000 deaths per year between 2030 and 2050 due to heightened heat exposure, increased infections and diseases amplified by warmer conditions, increases in catastrophic weather events, and malnutrition from droughts or floods that impact crop production.

In the early part of her nursing career, LeClair worked for Dane County as a public health nurse. She quickly found that the health of her community was being negatively affected by massive flooding that had happened years earlier, which was especially evident in an ever-increasing number of children who developed asthma due to toxic mold growing in previously flooded basements. The higher rates of flooding due to increasing rainfall in the region all pointed back to one thing: “I realized that this was climate change playing out right before our eyes.”

For LeClair, the study of place and the significance that the environment plays on the health of a community is where her passion lies. “As a public health professional, you’re working to help assure that people can have the healthy choice be the easy choice,” she explains. “It shouldn’t be difficult to build health into our lives, and our environment should make that easy just by matter of principle.”

Connecting the dots between people and place 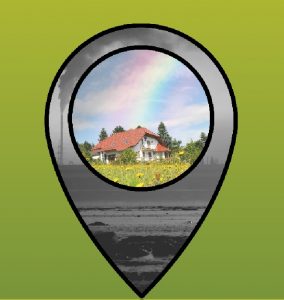 The connection between people and place is nothing new. Nurses have been making the connection between public health and the environment in which they live for centuries. Florence Nightingale’s theories on environmental impact helped strengthen the foundation of modern nursing practice as we know it, emphasizing that the environment had a strong influence on positive patient outcomes. Her work utilizing the environment to assist in a patient’s recovery helped prove that the external factors of fresh air, pure water, efficient drainage, cleanliness, and sunlight directly affected a patient’s life, development, and healing for the better.

Two centuries later, the effects of the environment on public health is making its way into conversations about climate change. However, LeClair suggests that there has been a lack of continuity in keeping environmental justice at the forefront of conversations in nursing.
“Nurse researchers have been writing and talking about environmental health since the beginning of nursing. This is nothing new. But recently, nursing has become so medicalized that it feels like we have almost lost that side of ourselves that looks at health holistically through a social justice lens. Even when we’re at the bedside in a hospital setting, assessing and keeping in mind things like the home environment that we’re sending our patients back into, we need to remember that health happens outside of our clinical environments. Health happens in the places where people live, learn, work, and play. For some people with marginalized social identities, these places can be degraded by environmental racism and other social injustices.”

LeClair adds that interest in getting back to looking at the importance of environmental justice in nursing is growing, especially with the younger members of the workforce and up-and-coming nurses. “I think we’re coming back to our roots in that way, and our students are hungry for it,” she says. “They get it and they’re truly interested in it, especially because of climate change. I think nurses are reawakening to these fundamental aspects of our discipline, and that’s exciting to me.”

“Health happens in the places where people live, learn, work, and play. For some people with marginalized social identities, these places can be degraded by environmental racism and other social injustices.” — Jessica LeClair

Owning the first step toward change

While even the smallest efforts can make a difference, LeClair stresses that true impact requires action. “What I’m realizing is that environmental justice really hasn’t been defined yet for nursing,” she says. “We’ve defined environmental health, but I’m seeing some inconsistencies with how we’re talking about environmental justice work and really owning it as a profession. I’ve looked at decades of research and have found that the same sort of conversations are happening again and again over time. But while nurse researchers have been researching and talking about this for decades, it seems like it’s a conversation that is revolving and ongoing. More nurses need to start applying environmental justice nursing research recommendations in order to directly impact nursing practice and environmental issues. There are a lot of conversations about what we should be doing, but not a lot of studies around what actually works.”

LeClair is confident that nurses can make positive, essential change on environmental justice issues worldwide, and it all begins with the holistic connection of people to place as the driving force behind taking the first steps to make an impact. “We need to remember that health happens outside of our clinical environments in the places where people live, learn, work, and play,” LeClair concludes. “You can’t have healthy people on a sick planet.”