The School of Nursing offers a certification program for bachelor’s-prepared RNs as well as a school nursing course for RNs with aassociate degree.

The bell rings, launching a constant flow of teens streaming in and out of the health offices. It’s a group of three small rooms, two of which have windows looking into a courtyard, a chair-lined hallway that doubles as a waiting room, a tiny bathroom and an alcove with a narrow refrigerator. It’s a tight space crammed with chairs and desks, the walls lined with artwork and inspirational quotes, corners filled with loosely rolled posters.

One student walks in from the hallway and announces that she’s there for a Band-Aid. She grabs it and leaves. Other students don’t stop to talk; they head straight to the bathroom, which is stocked with tampons and Clearasil, and return to the halls without a word. Others get medicine from the nurse, brush their teeth in the office sink or heat their lunches in the small microwave on top of a file cabinet. Some are there for a reprieve from the pressure of the school day. They recline in loungers, close their eyes and drift off while opera music plays softly in the background beneath the sounds of the slamming door, chorus of voices, and ringing phones.

For Madison’s West High School students, this is an enclave, a peaceful if not exactly quiet place where they seek out a variety of services and supports. The busy lunch period sees the highest traffic during the school day.

On this Thursday, dozens of kids—some alone, some in pairs or groups turning sideways or hugging the wall to let others pass—move through the health offices just off the main entrance to West High School. There is constant motion but not commotion—despite the volume of students, there is a rhythm to it all. What outsiders might expect to devolve into chaos is actually a predictable, familiar and well-managed level of activity.

In other words, this is a normal day.

Lynne Svetnicka (MS ’82), a lead nurse for Madison Metropolitan School District, worked as the West High school nurse four years ago before assuming her current role as a districtwide school nurse mentor. “When I left West High School, we were seeing well over 80 students a day,” Svetnicka says. “We were nonstop.”

There are an estimated 70,000 nurses working in similar health offices across the United States. It is an independent practice, as most schools are lucky to have a single nurse in the building some of the time. Immediate colleagues are health aides, social workers, psychologists, counselors and, of course, teachers—but generally not other nurses.

The work covers a broad health territory, too. In addition to the lice checks, ice pack distribution and thermometer readings that most people associate with them, school nurses perform an encyclopedic list of services for students and school staff.

They administer first aid. They perform vision and hearing screenings. They develop health plans. They pick up medication for students. They teach health classes (the human growth and development lesson frequently brings school nurses into fourth- and fifth-grade classrooms in Wisconsin). They perform mental health and addiction screenings. They train teachers and other school staff on medication administration. They monitor hallways. They report potential outbreaks of infections like norovirus or influenza.
“The jobs are a lot bigger than they were 20 years ago,” says Sara Parrell, another lead nurse for MMSD. “I had one epi-pen in my office in the 90s. When I left in 2011 I had 28 epi-pens, five students with diabetes, and other children with significant pain and suffering in their lives.”

Parrell’s heath office wasn’t an outlier. School nurses across the country have been seeing increasing numbers of students for serious and potentially life-threatening chronic health conditions. The U.S. Centers for Disease Control and Prevention reports that the number of individuals (children and adults) with asthma increased by 28% between 2001 and 2011. The CDC reports that in another ten-year period from 1997 and 2007, the prevalence of food allergies increased 18% among children under 18 years. And diabetes, too, is a growing problem. A study reported in the Journal of the American Medical Association found that in just eight years between 2001 and 2009, the prevalence of Type 1 diabetes in children increased by 21% and Type 2 by 30%.

Overall, more than 25% of school-aged children now have some kind of chronic health condition—up from 1.8% in the 1960s, according to the National Association of School Nurses (NASN).

Complicating things is the fact that many school nurses are managing larger numbers of students overall. The NASN formerly recommended a 1:750 nurse-to-student ratio, but that ratio was set in the 1970s before the proliferation of chronic health conditions among student populations. And many schools did not come close to hitting that target anyway.

Now NASN is revisiting its recommendations to develop a formula that accounts for factors that impact actual workload, such as prevalence of chronic health conditions, special education status and poverty levels. Parrell says MMSD already uses its own formula to determine nurse staffing in its schools.

“It’s a privilege to work with kids and their families and to be in the kind of role to be able to help.”
—Anna Melville 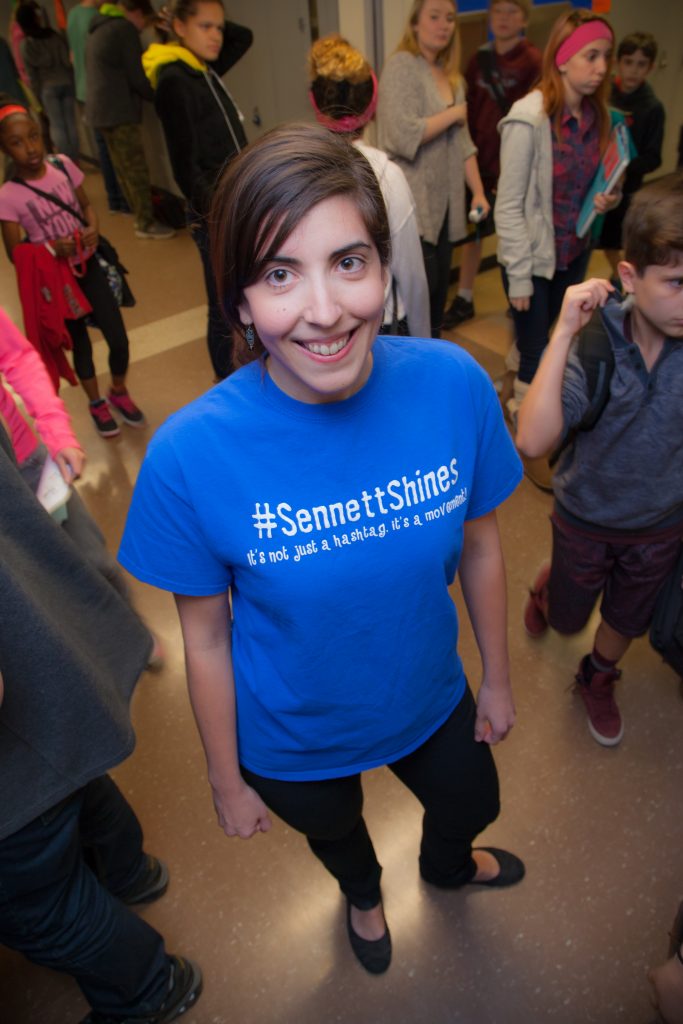 For Anna Melville, who is finishing up her first year as a school nurse at Sennett Middle School on Madison’s East Side (where she works a 70% schedule), that formula results in 648 students under her care. Of those, 346—more than half—have one or more health conditions noted in their files.

With just a year of experience, Melville can’t make historical comparisons about shifting workloads. She does agree that her days are often filled with complex health issues, few of which are resolved over the course of a school year and almost never with an ice pack or bandage. For example, she has conducted full neurological assessments after head injuries, and she regularly works with students whose families face the consequences of living in poverty, which contributes to and exacerbates health conditions like asthma and diabetes.

She recalls talking to students who were distraught about the dialog that emerged during and after the A Day Without Latinos rally in February. “You’d be surprised at what kids are willing to tell you if you’re willing to sit down and listen,” she says. “Kids are worried about their parents getting deported, and it does happen.”

Worry and stress are common among students regardless of their backgrounds. Middle school can be a battlefield for preteens and teens who are trying to both fit in and stand out. Now, social media broadcasts and amplifies the angst, insecurity and awkwardness inherent in coming of age. It’s a frenzied loop that plays 24/7. Many students feel pushed to excel in everything—academics, sports, extracurriculars—and manage unrelenting schedules of activities, lessons and studying. Still others face difficult challenges at home or struggle with full-blown anxiety or mental illness.

In fact, there are almost 5 million children in the United States with a serious mental health condition, and every year nearly 20% of children are diagnosed with a mental illness, such as anxiety, ADHD, depression or eating disorders. By middle school, substance abuse and addiction are not uncommon. School nurses like Melville encounter all of it and spend, on average, nearly a third of their time on mental health issues.

In the Face of Challenge, Optimism

Despite the challenges she faces—workload, complex conditions, limited resources—Melville sees more opportunities than limitations, and she is quick to point out that that is why she’s here.

“I really like this age group. They look to adults for guidance and still have that childlike spark, but they are also starting to think critically,” she says. “The environment of being in the school is really positive. The laughter, the band, the singing in the hallways—you just don’t hear that in the hospital.”

Melville knows. She worked in the UW Hospital neuro ICU as a student nursing assistant, and she was offered a residency upon graduation. Melville does not disclose the details, yet she acknowledges that the money would have been significantly better than what she is making now. That’s fairly common for all school nurses, who earn, on average, around $55,000 a year. Their peers in other nursing practices average closer to $70,000, and nurses working in critical care settings tend to make even more.
But for Melville, there was more to the math than the starting salary. Melville grew up with a passion for community service, she developed an interest in public health nursing while in school.

“There is this huge community piece,” Svetnicka says of the school nurse practice. “For nurses who want to work in the community, schools are smack-dab in the middle of that.”

Melville adds that she enjoys her independence and the relationships she forges with students. “It’s a privilege,” she says, “to work with kids and their families and to be in the kind of role to be able to help.”

Unlike their peers in hospitals and clinics, school nurses frequently practice alone. There is no one down the hall to consult, no one with greater insight. Nurses are the healthcare experts in the school.

This gives school nurses a great deal of independence in their practice, which many want and enjoy. Yet Lori Anderson, a clinical professor in the UW–Madison School of Nursing and former school nurse, says there is a flip side to that independence.

“There is an isolation to the practice,” she says. “That feeling stuck with me, of being out in a school, the only healthcare person, and people were counting on me to know a lot of things.”

Complicating things is the fact that the numbers of chronically ill students continues to rise while their conditions grow increasingly complex. Anderson says that for most school nurses, it is difficult to keep their professional development on pace with the rapid expansion of the school nursing practice. Many are left feeling underprepared to handle the health conditions, particularly mental illness, that they face in their student populations.

That is why Anderson developed eSchoolCare, a digital tool that connects school nurses with expertise from the School of Nursing and the American Family Children’s Hospital. With modules on asthma, diabetes, severe allergies, cancer, epilepsy and mental health disorders, eSchoolCare provides school nurses with health plan templates for various conditions, videos on medication administration and links to nurse- and doctor-vetted professional development opportunities.

Anderson notes that children with chronic health conditions miss more school than their healthy peers and are three times more likely to repeat a grade. While eSchoolCare is designed to keep school nurses current in their skills, confident in their practice and connected to each other and valuable resources, the ultimate goal is to maintain and even improve children’s health to keep them learning in the classroom as much as possible.

“Kids are in school more than they are anywhere else except home, and a lot of care is delivered within school walls. That’s why we call school, and school nurses, a hidden healthcare system,” Anderson says. “For parents of children with chronic health conditions, a school nurse can be a wonderful ally. By supporting school nurses and giving them resources they need, we are supporting children and their families.”