The United States Deputy Surgeon General, Rear Admiral Sylvia Trent-Adams, visited the School of Nursing earlier this month to deliver the 19th Littlefield Leadership Lecture, an annual speaking event that brings in a renowned nurse leader to share experiences and ideas to educate and inspire the Madison-area nursing community.

Trent-Adams’ talk framed public health as community health and called for authentic interaction with and involvement from the people that public health policies and programs are meant to serve and support. The key to serving populations, she says, is knowing them: where they eat, sleep, live, and pray. That means going where they are, listening, and learning about their needs and challenges. Engaging directly with populations is illuminating, Trent-Adams says, and leads to more successful programs with better outcomes.

“Going into a person’s home is one of the most humbling experiences that you as a nurse or as a provider can ever have,” she says.

Her remarks reflected her commitment to nursing’s holistic approach to health that looks beyond symptoms to how individuals and their families live with illness and work toward improved health. She also calls for a prioritization of health promotion, a culture of advocacy for health and healthy lifestyles rather than a culture that responds to disease and disorders as they occur.

“We don’t have a healthcare system. We have a sick care system,” Trent-Adams says. “I would like to see us move in the direction of health. How do we keep people from getting sick in the first place?”

That involves addressing social determinants of health—things like housing instability, food and employment insecurity, access to transportation, and insurance—on a community level. Trent-Adams believes that investing in public health has better returns for society than investing in illness and treatment. In essence, she argues, we get the “biggest bang for the buck,” she says, by focusing on health in the community rather than in the clinic. 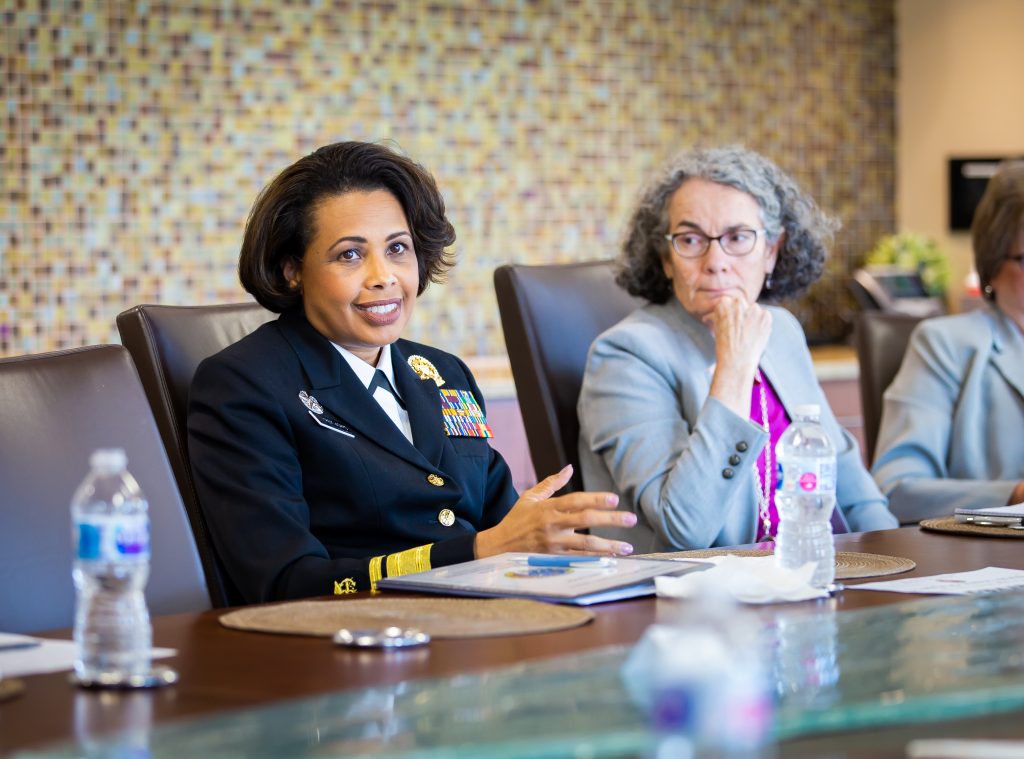 Before her public talk, Trent-Adams met with smaller groups of students, faculty, staff, and local healthcare leaders to discuss healthcare research and policy. She drew on her vast experience in nursing and federal government work, including three years as chief nursing officer for the U.S. Public Health Service Commissioned Corps, and shared insights into the way research does and should influence policy at the local, state, and federal level.

“We were fortunate to have the opportunity to hear from Rear Admiral Trent-Adams and to learn more about her successful public health nursing practice and leadership,” says Dr. Linda D. Scott, dean and professor. “Her comments reflect and validate the public health content in our curriculum and present public health as a dynamic and meaningful practice area for our students.”

As Deputy Surgeon General, RADM Trent-Adams advises and supports the Surgeon General in communicating the best available scientific information to advance the health of the nation. She served as interim surgeon general from April 2017 through September 2017. Before joining the Office of the Surgeon General, Trent-Adams was the deputy associate administrator for the HIV/AIDS Bureau of the Health Resources and Service Administration. While there she played a critical role in managing the Ryan White HIV/AIDS Program, a $2.3 billion effort that provides access to medical and support services for uninsured and underserved people living with HIV. The program also offers training for healthcare providers.

The Littlefield Leadership Lecture is named after Dean Emerita Vivian Littlefield, who led the UW–Madison School of Nursing from 1984 through 1999. The annual event is free and open to the public.