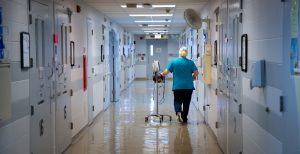 You might forget you’re locked inside a maximum-security prison if not for the white bars on registered nurse Paula Stelsel ’s office window. Stelsel ’92 is the nursing supervisor of the 60-bed infirmary at Dodge Correctional Institution in Waupun, the only 24/7 inpatient facility for men in the entire state of Wisconsin Department of Corrections. It is essentially a hospital at the heart of a prison, and nurses are its lifeblood.

“Working here, I’ve touched on everything from dialysis to post-op to hospice care. You’re getting a little bit of everything, and if you enjoy patient education, what a great place to come and work,” says Stelsel, who is one of more than 500 licensed nursing staff working inside Wisconsin’s state-run institutions. For the past 19 years, Stelsel has been at Dodge, where she manages both the infirmary team of CNAs, LPNs, and RNs, as well as an adjacent dialysis unit. Medical supervision comes from one full-time physician and one nurse practitioner—a ratio that offers registered nurses a rare autonomy that is present throughout much of correctional nursing.

“The mission of DOC is focused on reentry. How do our offenders get what they need while they’re here, to go back out and succeed?” Stelsel says. “Well, their healthcare is a huge piece of that.”

Just outside Stelsel’s office door, nurses wearing brightly colored scrubs (and discreet body alarms) are making copies and planning lunch while others tend to patients. The five-chair dialysis unit and the occupational therapy room are quiet today, but laughter arises from the day space lounge, where inmates—“patients,” always, to nursing staff—are gathered to visit with one another. Soon they’ll go back to their rooms on one of three infirmary wings that look just like hospital corridors except for the locked steel doors. The infirmary boasts many of the features present in any modern hospital—negative pressure rooms, a call light system, medical beds, and electronic records—but just beyond the nurses station, corrections officers sit in a station of their own, quietly monitoring screens and tracking every move.

Stelsel grew up in Waupun, working for years at the local community hospital. She drove past her hometown’s two prisons countless times with no real idea of what went on inside or of the ongoing need for highly skilled, compassionate nurses.

“Probably the biggest change for me, coming in from a community dialysis unit 19 years ago, was just learning how to feel safe in the environment and get used to the extra safety precautions,” says Stelsel.

The transition did not take long, she says, as she gained experience with the patients and took advantage of professional training. Stelsel also credits a collaborative partnership with security staff, who are not healthcare professionals but are nonetheless integral members of the healthcare team in a prison.

“Now I’m committed. I’m going to retire from here,” she says smiling. “I think this is just my calling.”

According to the most recent data gathered in 2008 by the Health Resources Service Administration, there were between 18,000 and 20,000 registered nurses working in correctional settings in the country. Here in Wisconsin, these nurses serve more than 35,000 people across 19 state prisons and 76 jails. Many, like Stelsel, have found the experience both rewarding and surprising.

“There’s a perception out there that prisons are like people see on TV, dirty and dangerous. But that’s not the case. They’re really not that far from a regular clinic that everyone and anyone goes to. The clientele is just a bit different,” says registered nurse Robert Frank. After completing his psychiatric certification at UW–Madison, he spent four years working at Dodge and three and a half years as a nurse practitioner at nearby Fox Lake Correctional Institution. “A lot of inmates haven’t had care, so you can enact meaningful change just by providing your compassionate care as a nurse. Their health literacy is pretty low, and a lot of them are very appreciative of the help that you give them, the compassion that you show them, the empathy. They’ve just never experienced those things.”

About a third of individuals under correctional supervision are housed in local jails throughout Wisconsin. They, too, receive healthcare services from registered nurses like Tania Wenzel.

“I never in a million years saw myself in correctional health care,” says Wenzel, a public health nurse who for 20 years has been practicing with the Jefferson County Health Department, which provides nursing for the county jail. Her team, which includes RNs as well as LPNs, sees between eight and 12 patients a day in a clinic setting, performing sick calls, follow-ups, and intake assessments for every new inmate. They see drug addiction and alcohol withdrawal, high blood pressure, diabetes, and more. They are constantly educating. They help deputies, for example, recognize alcohol withdrawal symptoms. They also precept nursing students from UW–Madison and other schools. The nurses also teach their patients—about pushing fluids, proper nutrition, the importance of sleep, and especially how to continue their healthcare once they’re released.

“One of my passions is making it so that people know what’s available outside of jail,” says Wenzel. “Because the vast majority are from, and will come back to, our community.”

Although the public associates nurses with hospitals and clinics, much of nursing today happens in the community and outside the walls of the traditional healthcare system. Dr. Karen Solheim, director of undergraduate programming, says community health is woven throughout the School of Nursing curriculum, and course objectives include learning outcomes in social justice and congruent care. In their senior-year rotations, students are guaranteed at least one community health experience in schools, parishes, public health, home health, and corrections.

“Students have found the experience is sometimes quite tough, but also very meaningful,” Solheim says. “Not everybody resonates with it, but there are some who, when they get to a community or public health setting, they find their calling. They think, ‘This is me.’”

For many students, community experience brings their first exposure to the significant health barriers impacting not only underserved populations as individuals but as
a community.

“The students’ eyes are opened to many different socioeconomic statuses, different lifestyles, home and educational circumstances,” says Solheim. “One of our goals is to put that in the larger context and think about social justice in relation to that, including access to care.”

At the School of Nursing, it is the director of clinical practica who connects undergraduate and graduate students with clinical rotation placements. Dr. Tina DeGroot served in that role until early August before leaving to join the faculty at Edgewood College.

“My view of this role is really about workforce development,” she says. Once DeGroot started driving all over the state to ask hospital executives and directors of nursing not what they could do for the School of Nursing but what the School of Nursing could do for them, her placements became more varied—particularly in community nursing and especially in corrections.

“I was really surprised at this last graduating class that so many students wanted exposure to correctional nursing and psych mental health,” she says. She attributes this interest to students’ increasing personal experience with family members who may be incarcerated, addicted, or living with mental health issues—all of which are talked about more openly today with less stigma than in the past. In just one year, she increased correctional placements from one student to between five and eight per semester and anticipates growing interest in the practice area.

“I think the life lessons that our students can take away from the breadth of the clinical placements here is really one of the broader goals of the School of Nursing. And what I’ve learned is that the nurses who are now preceptors are so excited to be able to teach our nurses what corrections is, and what impact nurses can have in interrupting that cycle of disparate healthcare,” says DeGroot. “They’re a captive audience. They’re not going anywhere. It’s the perfect patient population to make big major changes in healthcare.”

Muse says that although correctional healthcare has its obvious challenges, it also enables nurses to gain confidence and competence across specialty areas as well as in both acute and emergency care. Beyond that, Muse explains, correctional nursing poignantly—and daily—reinforces the philosophy behind the entire nursing practice and profession.

“In nursing, one of the things you learn is to take the patient where they are. Working in corrections gives you that opportunity. It teaches you to be humble, recognize differences in life experiences, and how to not be judgmental,” says Muse, whose nursing career spans more than three decades and includes hospital, community-based health centers, academia, and corrections. “Everyone is an individual. Everyone has intrinsic value. They may have made some bad decisions, but that’s already been dealt with. That’s why they are here. It’s not our role to judge or impart sentencing or discipline. Our role is to care, apply knowledge and skill to assist the patient with healing, and to educate.”

Tapping into compassion is not a problem for Muse, who sees the lion’s share of prisoners as individuals who faced difficult, sometimes impossible, life circumstances, such as extreme poverty, that forced decisions that ultimately led to incarceration. She is especially empathetic with those with undiagnosed or untreated mental illness, including addiction, who may never have ended up in prison in the first place had they had access to adequate and affordable mental healthcare earlier in their lives. “These people deserve care,” Muse says. “It is a shame that we have to be their mental health provider.”

Overall, prisoners are an especially vulnerable population facing serious health challenges, such as disproportionately higher rates of infectious diseases, sexually transmitted infections, addiction, hepatitis, cancer, and mental illness. At Dodge, for example, 37 percent of the prison population has a mental health diagnosis. (At Taycheedah Correctional Institution, the state’s only maximum-security women’s prison, that number is a staggering 91 percent.) Prisons and jails also face the same aging baby boomer population and projected nursing shortage that affect the rest of society. The need is great, the scope of practice broad, and the opportunity to make a difference, Muse says, is profound. And yet unlike other healthcare settings looking to hire the best nurses, prisons are also fighting perception.

“We have to compete for the same pool of nurses, and we are challenged because people don’t often know a lot about corrections, or they have some fear or myths about working in the correctional setting,” Muse says, noting that nurses may also not realize how much correctional healthcare has evolved.

There was a time, what Muse calls the dark days, when physicians, nurses, and other providers were nowhere to be found in jails and prisons. There were no standards of care, and prisoners treated their own wounds or sought assistance from other inmates. Then came the landmark 1976 Estelle v. Gamble ruling, which determined that prisoners had a constitutional right to healthcare. Now the National Commission on Correctional Health establishes standards for healthcare in jails and prisons, and the American Nurses Association publishes standards for correctional nursing.

Muse works hard to dispel misconceptions and to highlight the rewards of correctional nursing. Relationships with people like DeGroot at the School of Nursing are invaluable, as they help her reach students while they are still forming their ideas about where and how they will practice in their careers. The tide is turning, Muse says, noting that she, like DeGroot, has seen an increased interest among students to learn more about practicing in prisons and jails. “More and more over the years, people get it. That there’s just something in corrections that’s really good,” she says, “and that it’s a practice worth participating in.”