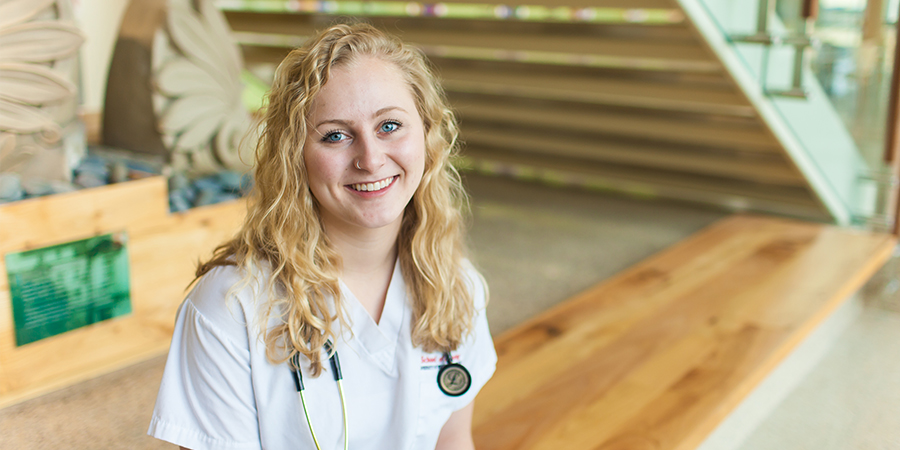 Wither her small-town roots and big-campus dreams, McKenzie Capouch is not unlike many other students who find their way to UW-Madison. For Capouch, home is Ettrick, Wisconsin. Population: 1,300. That is roughly a hundred more people than the number of students who lived in her freshman-year residence hall.

While she found it overwhelming at first, Capouch quickly warmed to Madison. Recognizing the vast opportunities available to her, she makes a point to take in as much as she can—including a summer study-abroad trip to Sri Lanka that was also her first time out of the country.

“It was eye-opening,” she says. “It helped me realize that my perspective is not necessarily always correct.”

Intent on nursing from day one, Capouch is even more committed to nursing than when she came to campus nearly four years ago. “I feel like I’ve always known it’s what I wanted,” she says.

The recipient of the Gwen P. Shapiro Rural Wisconsin Nursing Scholarship, Capouch says she had the support—both financial and academic—she needed to position herself for a wide range of career opportunities in just about any part of the world. Without student loans weighing her down, Capouch says she could head back towards home and work in a rural setting that might pay a little less than some urban markets. Or she could explore a career in an entirely new place—something she never imagined she would want to do before her years in Madison.

“I’d love to take the benefit of my education back home, but I also like the expansive diversity that I experienced in Madison,” she says. I’m passionate about nursing, and the UW is really preparing me for anything.”