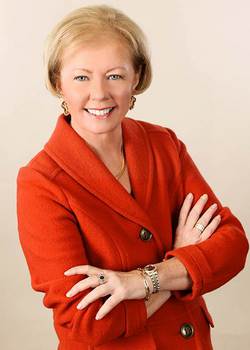 For nursing leader Joanne Disch, PhD, RN, FAAN, having what she calls “the nursing lens” at the health care policy table is a no-brainer. Why? Because without nurses, says Disch, 1968 UW–Madison School of Nursing alumna and past NAO Distinguished Alumni recipient, decisions made by health care systems “are going to be suboptimal.”

Disch has been a dominant player in health policy decision making for most of her career, with proven success. She served as president of the American Association of Critical Care Nurses and its certification board. She led the national board of directors for the AARP, which is more than forty million members strong. She headed up the American Academy of Nursing (AAN), with its 2000-plus membership. She is currently a board member of the UW–Madison School of Nursing and a clinical professor at the University of Minnesota School of Nursing.

“It’s not a matter of parity—that is, we have to have nurses on the board because we have physicians,” says Disch, who also serves on the board for the National Center for Healthcare Leadership and Aurora Health Care. “What nurses bring is so vitally important and so very different from anyone else sitting around the table. It’s imperative for the industry and for the organization to have that ‘nursing lens.’”

Disch defines this perspective as holistic, person centered and pragmatic. She explains, “A physician and nurse were talking with the patient about his new medication and the need to weigh himself daily. ‘If you gain weight—more than three pounds—the drug isn’t working correctly, so call us or come in and see us,’ said the physician.

“After the physician left the room, the nurse said to the patient, ‘Tell me about your home. Do you have a scale?’ The patient didn’t have a scale; he was homeless. So the nurse said, ‘In a couple of days, if your shoes are feeling tight, give us a call. This means you’re picking up fluids, and the drug isn’t working.’

“That’s the nursing lens: We can see a systems flaw, but also see what the patient’s needs are.”

In October of 2013, Disch completed her two-year run as president of the AAN, helping turn the largely honorific organization into one with very active Fellows. “It’s never done by one person,” says Disch, “but together, we increased the engagement of members stepping forward on expert panels, agreeing to work on projects, and being nominated for elected positions.”

As the academy’s president, Disch helped strengthen expert panels, who are groups of nursing leaders using evidence and advocacy to shape policy in particular areas. Among the highlights was the work by a coalition of expert panels whose position statement supported the Supreme Court’s ruling to strike down key parts of the Defense of Marriage Act demonstrating inequality for American citizens. AAN also placed its weight behind an initiative called “Mayors against Illegal Guns” to persuade those mayors who had not supported the movement to limit illegal guns to rethink their position.

As her tenure neared a close, Disch and the AAN board launched the “Have You Ever Served in the Military?” campaign. This question is one that nurses and other health care providers will now be asking their patients after the expert panel on veterans and military health recognized that many individuals who are serving or have served are not getting the benefits they deserve. It encourages health care providers outside the VA system to ask about their patients’ military backgrounds, Disch says, which is key to serving veterans’ health better.

Disch credits her successes in organizations to these career building blocks: become involved through volunteerism either at the local or regional level, nurture your network and interpersonal relationships, be alert for opportunities arising in your community or nationally, and respect the people you know and work with.

“People remember that you’re a good colleague—that you were forthright, came prepared, did work well, and were collegial,” Disch says. “You never know who you might re-encounter later in your career, so develop a history of respectful, collegial relationships.”

For nursing alumni looking to bring their expertise to the policy table, Disch offers an informed recommendation. “Your number one goal is to advance the mission and pursue the goals of the particular organization you are serving,” says Disch. “As you do that, you can advance nursing by being prepared, understanding the issue, doing the background work, and bringing issues forward through the nursing lens. It’s engagement that enables you to make a real impact.”