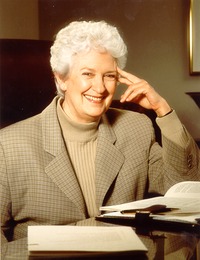 “When Florence Nightingale first arrived at Scutari during the Crimean War,” explains alumna Joy Calkin, PhD, “the first thing she did was remove a horse’s carcass from the cistern where the bathing and drinking water was kept. For me, nursing all goes back to the same question: What is it that gets in the way of patients receiving the care and support they need to stay well? It’s the systems that are in place that cause the most problems.”

For most of her nursing career, this accomplished nursing alum from the UW–Madison has been trying to figure out what the “dead horses” are and how to remove them from the health care system. She has ascribed to Nightingale’s systemic approach in all her roles—from nurse, to professor, to CEO of an international health care services organization.

Calkin’s focus on health systems began at the School of Nursing under the mentorship of Florence Blake, a pioneer renowned for establishing the field of pediatric nursing as a specialty. Calkin, a native of Nova Scotia with a BScN from the University of Toronto and staff nursing and teaching experience in Toronto and New Brunswick, respectively, sought out Blake’s mentorship when she decided to pursue her master’s degree in pediatric nursing. Blake ignited Calkin’s interest in health systems.

First, Blake, a nurse herself who cared for difficult pediatric cases, assigned each student to visit the nursing unit of hospitalized children at Wisconsin General Hospital—sit for three hours, in a patient’s room, and do nothing but observe what went on, Calkin explains. The student had to write down what each saw and heard and then, later, record what was thought and felt.

“It was an incredible learning experience,” says Calkin. “When you observe and you think about what you see, you begin to understand the gaps in the care that people are receiving and the things that get in their way of getting better. This is how I became interested in health systems,” Calkin says.

Calkin obtained her PhD in health services administration from the UW–Madison in 1980. During her time at UW–Madison, she held faculty positions in the School of Nursing and in the Department of Preventive Medicine-Health Services Administration.

She started a program within Health Services Administration with two other faculty members from the medical and business schools. Its aim was to teach physician administrators, Calkin explains, “How to think, from the patient out, from the client they’re serving out, instead of focusing on medical diagnoses and treatment.”

She also developed a health services consulting firm with three colleagues, in part, to give students experience in health systems design and service delivery.” A Milwaukee hospital was losing about $1 million a month in their OR suite,” Calkin says. “I used Ms. Blake’s approach: The four of us went in to observe the different parts of the system. Engineers started from the front door and walked through what was happening to the patient. We identified one key step in the process that accounted for almost all of the unnecessary losses.

Calkin moved back to Canada in 1985 to become dean of nursing at the University of Calgary and, later, was appointed vice president (academic) and provost. She continued to care for patients in a diabetic clinic, which, she said, “kept her feet on the ground.”

In 1997, she was appointed to the board of Extendicare, Inc.—a company with nursing homes and hospitals in three countries. She later was named its CEO. She attributes both positions to her health background from UW–Madison and work at the University of Calgary.

Now semi-retired and living in Nova Scotia, Calkin offers this advice to alumni. “Wherever you are or whatever you’re doing, take time every week or at least once a month to sit in a clinic or, with permission, in a patient’s room and see and think about what is in the way of them being well.”